On this page, we look at one of two detailed examples of societies with contrasting vulnerability to climate change, focusing on the United States of America.

Climate change in the USA: the problem

The USA is a High Income Country according to the World Bank’s classifications. As such, it has relatively high levels of income which increases the country’s coping capacity, also known as its adaptive capacity. However, it’s not simply that the USA is relatively rich – the USA is still vulnerable because of its exposure to climate change and the geographical sensitivity of its increasingly elderly and coastal population.

Climate change is almost certainly going to make the USA warmer. Temperatures in the USA over the 20th century have increased overall:

Furthermore, the extremes of temperature are likely to increase. The map below shows the increase in temperatures under two scenarios of different greenhouse gas emissions (called RCPs, or Representative Concentration Pathways). Even with a reduction in emissions, temperatures are still likely to go up.

The situation regarding rainfall is less clear. Rainfall averages over the course of the 20th century were variable, as shown on the graph below. 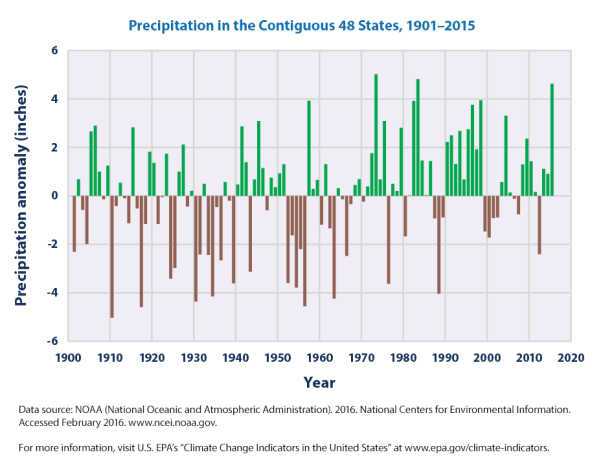 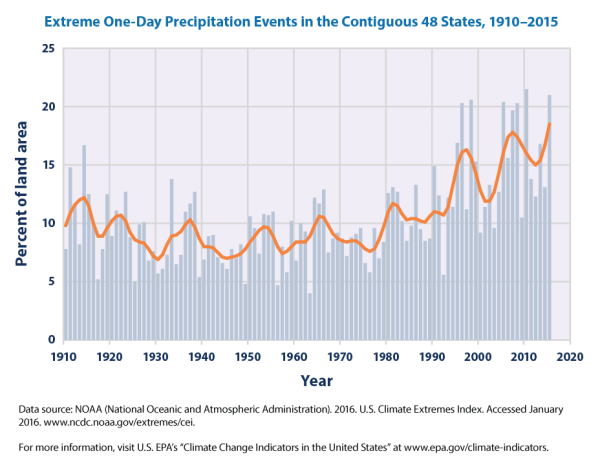 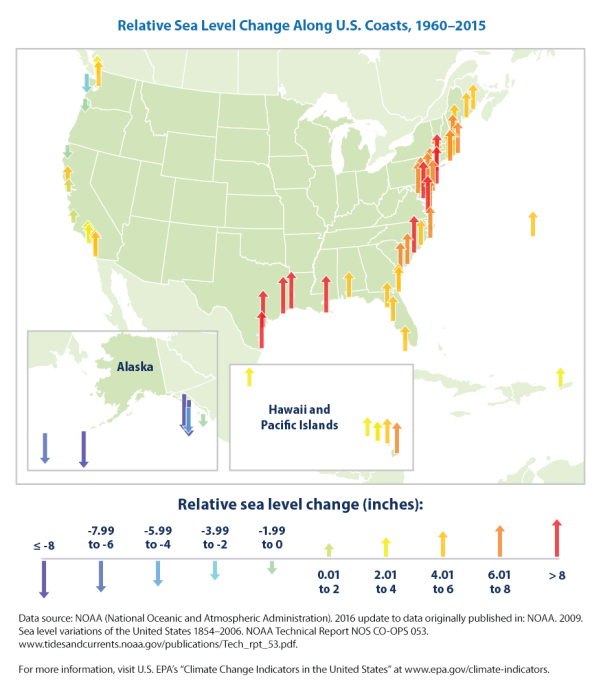 The USA is the world’s largest economy. While this increases its adaptive capacity, it also means the US has a lot to lose! GDP could be reduced by 1.2% annually if a 1°C temperature increase occurs, and lead to greater inequality due to the uneven spatial impact of the costs, with the south being hit more than the north (Hsiang et al., 2017). This is shown on the map below, showing the cost of damage from climate change. Part of the reason why the south will experience more difficulties is the cost of sea level rise (Florida especially is very low-lying) and that the elderly population is concentrated in the south, so there is less adaptive capacity.

The most obvious economic impacts will be responding to disasters, such as flooding from tropical storms. These are already costing more over time (see graph below) but this is not necessarily because there are more disasters: as the economy increases, there is more wealth that can be destroyed by a disaster, so the figure would be expected to increase if the economy does well.

Economic inequality may be increasing too. This is partly because in general the poorer districts are in the south. These are likely to be bit more by sea level rise and significantly rising temperatures.

The problems for people in the USA are likely to be highly dependent on their location. As seen above, the economic impacts are spatially more likely in the south; this corresponds with an increase in population that occurred since 1970. The central and northern regions have generally lost population. This is a key factor in explaining not just the economic impacts, but also the potential for climate change to harm individual people and communities.

Furthermore, the south-east is the area of the USA with the oldest population. This is partly because of the migration to retirement communities in the south-east, and also because of the generally increasingly aged population in the US. By 2050, the proportion of the population aged over 65 is expected to grow to 20%, from just 13% in 2010 (EPA, 2017b).

These older people are much less likely to cope with climate change, as they are more physically sensitive to increasing temperatures, and they are less adaptive as they can move less easily. This results in the cumulative impact on elderly people in the south, making many cities in the Florida more vulnerable to coastal flooding by 2050. By comparing the two tables below, we can see that the most vulnerable cities are in the same state (Florida) as the most vulnerable populations.

Plumer and Popovich, 2017. As Climate Changes, Southern States Will Suffer More Than Others. https://www.nytimes.com/interactive/2017/06/29/climate/southern-states-worse-climate-effects.html Accessed 15 March 2018.

Look at https://www.epa.gov/climate-indicators/weather-climate and establish the trends in other climate indicators. What does this suggest about the USA’s vulnerability to climate change in the future?