On this page, we look at two terms that are often misunderstood – urbanization and urban growth, and explain both in relation to natural increase.

The difference between urbanization and urban growth

Urban growth can refer to any type of growth of the urban environment. For example:

Some sources suggest very specific meanings of urban growth, such as:

As a result of this wide-ranging interpretation of the term, it is safe to use the term ‘urban growth’ as a catch-all for any type of growth. However, for changes that affect just one aspect of the urban environment it is best to be specific. For example, for economic changes in urban areas, it is best to refer to ‘economic growth’ as it is the economy that is growing not the urban area.

Urbanization has a more specific meaning. It refers to an increasing proportion of a population residing in urban areas in comparison to rural areas.

The difference between urban growth and urbanization is that urban growth reflects a general increase in either the land area or the population size of an urban area. Urbanization is about the relative proportion of people residing in urban areas in a given area (such as a region, country or continent).

The graphs below show the United States. In the USA, urbanization is occurring because of a shift in the percentage of population living in urban areas. Meanwhile, urban growth is also occurring as the urban population gets bigger. 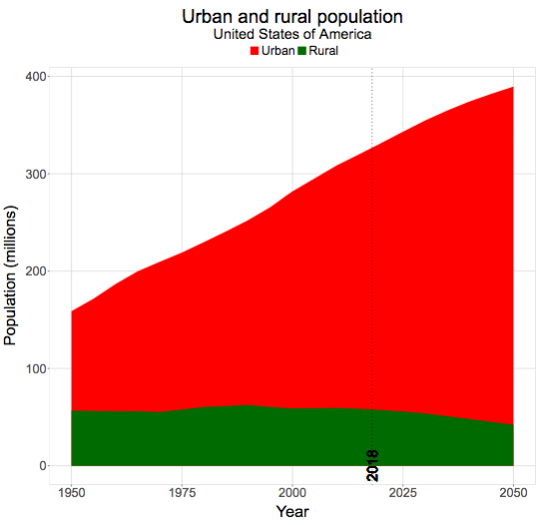 Hong Kong (part of China, but a semi-autonomous Special Administrative Region), already has 100% of its population classed as ‘urban’, so urbanization cannot be occuring – there is no increase in the proportion of the population living in urban areas compared to rural. However, urban growth is occurring, as the total urban population continues to grow. (In actual fact, there are rural settlements in Hong Kong, so it is a question of how the urban area is defined. See the page “Characteristics of urban places” on this site.) 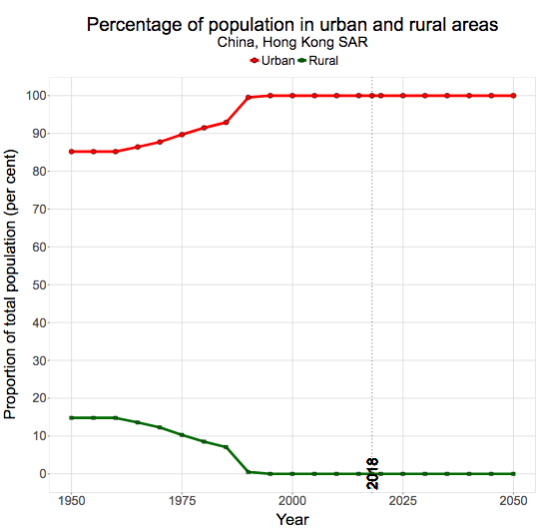 Natural increase, also known as natural change, refers to the change in population size caused by births and deaths. When there are more births than deaths, the population increases. Populations may also grow due to in-migration. (Note the difference between in-migration and immigration: immigration usually refers to migration coming into an area from another country, so in-migration is a more appropriate term for migration from any area.)

The following key terms are important to be able to define (Population Reference Bureau. 2009):

Rate of natural increase: The rate at which a population is increasing (or decreasing) in a given year due to a surplus (or deficit) of births over deaths, expressed as a percentage of the base population.

Birth rate (or crude birth rate): The number of births per 1,000 population in a given year.

Death rate (or crude death rate): The number of deaths per 1,000 population in a given year.

There is very little data about the relative impact of natural increase compared to migration. However, several key points can be summarised:

The Data Team [The Economist], 2015. Bright lights, big cities: Urbanisation and the rise of the megacity. https://www.economist.com/node/21642053?fsrc=scn/tw/te/dc/brightlightsbigcities

Create an infographic of this page in conjunction with your notes from the population section of your course. Remember to consider the audience when thinking about colour, text styles and font size.