On this page, we look at the costs and benefits of tourism as a national development strategy, including economic and social/cultural effects.

What is a national development strategy?

A national tourism strategy is a government policy that encourages tourism that brings benefits to the country. Most countries have national development strategies relating to aspect of their economic or social development; for example, China has had a series of five year plans since 1953 where goals are set and initiatives to meet those goals are outlined. At the time of writing, China is currently implementing the ‘Thirteenth Five Year Plan’ (from 2016-2020) which includes plans for the economy, national defence, and even demographic change.

Many lower income countries have adopted national plans for tourism. Tourism is seen as a beneficial industry to focus on for several reasons, including:

Most countries include a commitment to sustainable tourism in their national tourism development plans. In practical terms, there are some other common elements that most national tourism strategies focus include:

Costs and Benefits of tourism for development

The costs and benefits of tourism as a development strategy can be evaluated by the geographical themes of economic, social and environment issues.

Economic development is often seen as the priority for lower income countries because without additional money, projects to improve health, education, environment and so on cannot be funded.

The theory of cumulative causation is relatively simple, as shown in the diagram below. The impact of tourism can be positive because the money from tourists circulates through the economy, benefiting people at different stages. 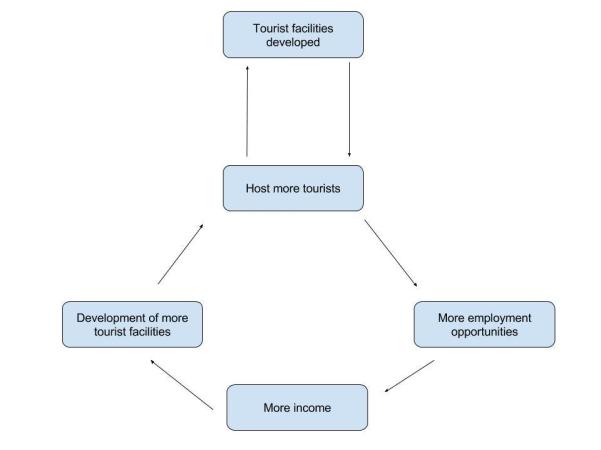 For example, think of the typical package holiday:

The diagram below shows out economic leakage can operate on even more levels:

There are several other economic impacts:

Social impacts are those that primarily affect people and culture, although they can overlap with economy and environment.

There are several negative impacts but also some positives:

Would tourism be a suitable way to develop your local area? Why? Consider: