On this page, we look at government-led adaptation and mitigation strategies for global climate change, including global geopolitical efforts recognizing that the source/s of greenhouse gas emissions may be spatially distant from the countries most impacted, and carbon emissions offsetting and trading technology, including geo-engineering.

Governmental responses to climate change vary significantly due to many factors, including the political stance towards climate change which can change abruptly following changes in government leadership. For example, in the United States, policies regarding climate change included signing up to the Paris Climate Agreement in 2015 and a 2013 presidential executive order which required federal agencies to prepare for climate change were reversed by the incoming administration early in 2017 (Merica, 2017).

This page details several ways in which governments have responded to climate change.

The United Nations has led the coordination of governmental responses to climate change. These have generally aimed to mitigate climate change, meaning to slow it down or stop it. Below is a chronological summary of the major UN agreements.

The IPCC was created in 1988 by the United Nations Environment Programme and the World Meteorological Organisation. Members now include 195 countries that send representatives to the decision-making sessions.

The IPCC is best known for its ‘Assessment Reports’ which are released periodically and are available at http://www.ipcc.ch for everyone to read. At the time of writing, the latest was Assessment Report 5 (AR5) in 2013-2014, while AR6 is due to be released in 2022 (IPCC, n.d.). The Assessment Reports are usually presented as three separate reports plus a synthesis report. The reports are not original research but instead are summaries of peer-reviewed scientific papers that have been published on the subject of climate change. The reports are based around separate ‘Working Groups’ which each deal with a specific aspect of climate change (IPCC, 2013):

The UNFCCC was initiated at the 1992 Earth Summit in Rio de Janeiro and was formally created in 1994. Its stated aim is: “Preventing “dangerous” human interference with the climate system” (UNFCCC, 2014). Most of the world’s nations have signed up to the convention.

It built on the work of the IPCC in recognising that climate change is real, and that human activities are the main cause of the current period of climate change. It also put the onus on developed economies to reduce their emissions the most because they are the main source of emissions.

Today the UNFCCC is best known for organising an annual climate change conference. The most famous of these were the 1997 Kyoto conference, 2012 Doha conference, and the 2015 Paris conference, which both led to agreements between governments to take action on emissions. These conferences are known as COP with a number after them. COP stands for ‘Conference of the Parties’ (meaning all the countries that have signed up to the UNFCCC) and the number refers to the number of conferences since the first one in Berlin in 1995. For example, COP21 was the 21st conference since 1995 and was held in Paris in 2015.

The Kyoto Protocol was the world’s first major inter-governmental plan to reduce emissions. It was agreed at the end of the UNFCCC’s COP3. The protocol is a legally binding agreement for countries to reduce emissions. It puts “a heavier burden on developed nations under the principle of ‘common but differentiated responsibilities’” (UNFCCC, 2014b). This means that while it recognised that all countries must take action, the economically developed countries were expected to take more responsibility.

The main features of the Kyoto Protocol were (UNFCCC, 2014c):

Most importantly, these actions were not to be taken immediately. Instead, they were to be enacted in the future – specifically, 2008-2012. Even more importantly, the world’s largest emitter of greenhouses gases, the United States, did not ratify the agreement and formally left in 2001 (CNN, 2018). (The US is still a member of the UNFCCC.)

In 2012, at COP18 in Doha, the countries that were still members agreed to extend the period to 2020. However, the Kyoto Protocol was still criticised by some for being too weak. Its critics argued that the Protocol didn’t aim for enough reductions of emissions; some countries were allowed to increase emissions in order to allow them to develop economically; and the United States did not agree. These problems led Canada to withdraw from the agreement in 2011, arguing for a stronger agreement in its place (CNN, 2018).

In 2015 at the Paris COP21, over 190 countries agreed a much stronger deal which effectively replaced the Kyoto Protocol and the Doha agreement. The main features are (UNFCCC, n.d.):

However, the Paris Agreement has been criticised for being non-binding. This means that countries that fail to reduce their emissions can’t be forced to do so. Furthermore, some governments have claimed that the Agreement is bad for business because it requires unnecessary changes to industry. The United States pulled out of the Agreement in 2017 for this reason.

The idea of carbon emissions trading was a key element of the Kyoto Protocol. Each country is allowed an amount of emissions. If a country does well and reduces its emissions even lower, they have a ‘spare’ emissions allowance that they’re not using. This means they are in ‘credit’. A country that hasn’t reduced its emissions enough can now purchase the ‘spare’ emissions from the first country. This is carbon trading (UNFCCC, 2014d). The idea of emissions trading is that it leads businesses and governments to reduce their emissions to save money, and also that it incentivises all countries to reduce emissions – not just the richer countries (IETA, 2015).

Carbon trading has continued under the Paris Agreement. The World Bank produces an annual report that shows the state of carbon trading worldwide.

Carbon offsetting operates on a similar basis. On a personal level, you can offset your carbon emissions by doing something that contributes to a net reduction, such as by planting a tree to absorb the emissions that you create from driving to work. Offsetting is when the total emissions are reduced by removing them from the atmosphere, such as though growing more forests. In the Kyoto Protocol, countries were allowed to offset their emissions by paying for projects in other countries that led to greater overall reductions in emissions. A version of this was known as a Clean Development Mechanism in the Kyoto Protocol (UNFCCC, 2014e).

There are several existing technologies that can reduce emissions, mainly through the use of renewable energy sources:

However, these are all ways of reducing the emissions that humans are creating. The problem is that these methods require a big change in the way that human industry, electricity generation and transport work. Some people have suggested that there are technological ways to deliberately manipulate the climate instead of the emissions.

Two broad types of geo-engineering have been proposed (Scott, 2012):

Both types of solutions have been criticised as unrealistic for several reasons including cost, risk, effectiveness and whether they would be available in time (see graphic below). Furthermore, the associated problems of burning fossil fuels – such as the acidification of the oceans, and the air pollution and its impacts on human health – would not be addressed by such strategies. 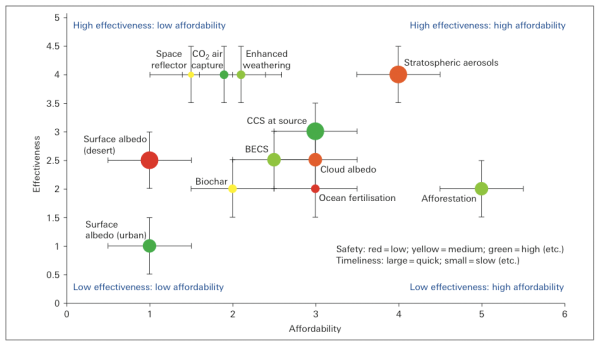 Look at the global geopolitical efforts to reduce climate change, as outlined on this page. You are tasked with putting these efforts into an easy-to-understand poster to educate the general public on these key initiatives. You can have a maximum of 80 words, and should use a diagram or infographic format.