On this page, we look at the link between participation in leisure activities and the level of economic development in a country. We also investigate two detailed examples to show how participation can change over time.

Introducing the link between leisure and economic development

Before we go any further, it’s vital to recognise that ‘leisure activities’ encompasses a very wide range of activities, from watching TV to playing in sporting competitions.

Why would we expect there to be a link between participation in leisure activities, and wealth?

Be careful! The statements above are by necessity highly generalised. There will be many exceptions to each of them.

Participation varies within countries: US example

The graph below shows the participation in sports for different household income levels in the United States. The data (sourced from the Sports & Fitness Industry Association) identifies that households on lower incomes are less likely to participate in sport.

There is a similar link between income and TV watching, as shown on the graph below. 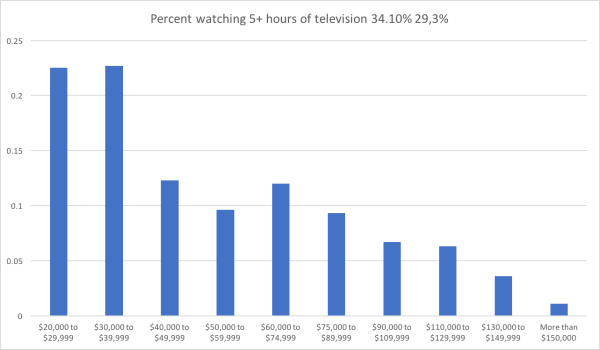 This apparent link may exist because of a positive multiplier effect, also known as cumulative causation. The graphic below shows how an active childhood can lead to a higher income in life and the passing of the benefits to the next generation, creating a virtuous spiral of improvement. However, there are multiple factors involved in such an effect and it is not appropriate to suggest that more physical activity is the only solution to societal problems.

Does a link really exist?

There is one leisure activity which is on the rise in almost all LICs and MICs – watching TV. The graph below shows the number of hours watched in selected countries (OFCOM, 2013). As people become richer, they have more leisure time and this can be used for watching television. However, the graph also shows that this relationship isn’t linear – although the most TV is watched by the USA, Sweden’s per capita income is higher yet they watch the least TV.

Similarly, the graph below shows the household wealth for selected countries against the time devoted to leisure (OECD, 2016). There appears to be little relationship, with the United States the outlier with the highest wealth to the far right of the graph. However, the selected countries are from the OECD. Similar data is not collected in many MICs and LICs owing to the difficulty of collecting data.

The graphic below is from the 2014 World Football report (Repucom, 2014). The figures show what percentage of the population expresses an interest or participation in football. There is not necessarily a link between participation or interest in football, with a mixture of African, Asian and European countries topping the table.

Lee, A. 2015. 7 Charts that Show the State of Youth Sports in the US and Why it Matters. Aspen Institute. https://www.aspeninstitute.org/blog-posts/7-charts-that-show-the-state-of-youth-sports-in-the-us-and-why-it-matters/ Accessed 30th October 2017

Using the ideas from the positive multiplier effect on sports, add your own ideas into a flow diagram explaining the negative multiplier effect from a lack of participation. Give it an appropriate title such as ‘Negative cumulative causation from lack of participation in sports’. The number of steps is up to you but it should look something like this:

Buy me a coffee?

Thanks for visiting – if you want to show your appreciation, feel free :)