On this page, we look at corporate strategies to address global climate change.

For the purposes of this page, ‘corporate’ refers to profit making businesses. The views of business are very varied, and can be determined in several ways, such as how much effort companies are making to reduce their carbon emissions. Another way is that of the UK-based thinktank (a thinktank is a group of experts giving an opinion on something) InfluenceMap. They conducted a study and looked at how corporate entities were responding to climate change in terms of:

They found that of the fifty most influential businesses worldwide, 35 “are actively lobbying against climate policy” while the other “15 of the 50 most influential are pushing for an ambitious climate policy agenda, favouring renewable power and electric vehicles” (InfluenceMap, 2017). These companies are shown on the graphic below.

We can see two general responses:

These two responses will be viewed on this page through two examples of action:

It’s very important to note that these two responses are not opposites of each other. A company that pays lobbyists and denies climate change might have a very strong corporate social responsibility policy for things like reducing air pollution or improving workers rights. Similarly, a company that has a very strong aim to reduce emissions might also spend a lot of money trying to persuade the government of its opinions.

These CSR policies are often framed around the idea of the ‘Triple Bottom Line’ (Economist, 2009):

The Triple Bottom Line idea is that you can’t just measure a company’s success by the amount of profit they make, because if they damage people and environments along the way then they will eventually lose out financially too. For example, if you don’t train people in your factory, then you’ll be making sub-standard products which won’t make any money. And if you don’t look after your environmental impact, then you might run out of raw materials, or your customers might stop buying your products because they’ve found out how damaging they are.

There are some major movements that are based entirely around the concept of the Triple Bottom Line and the need for Corporate Social Responsibility. Fair Trade is a movement that aims to make profit while protecting the environment and empowering people in poorer countries. However, such movements remain a very small part of the overall economy – Fair Trade was less than 1% of the UK food market in 2012 (Fairtrade, n.d. and Statista, 2018).

Google began releasing an environmental report on its activities in 2016. It states that as part of its mission to make information more accessible and useful, it aims to “meet the challenges posed by climate change and the need for resource efficiency by working to empower everyone—businesses, governments, nonprofit organizations, communities, and individuals—to use Google technology to create a more sustainable world” (Google, 2017). The result is that Google is regularly applauded for its CSR policies: in 2017, it was the world’s third most trusted brand and the third most socially reputable company (top place was taken by Lego, and number two was Microsoft) (Reputation Institute, 2017). 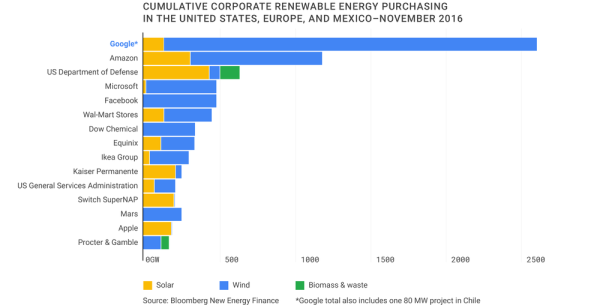 Furthermore, Google encourages more sustainable activities amongst its customers, such as (Google, 2017):

Lobbying is when people attempt to change government policy by convincing the politicians in government to agree with them. It’s important to note that lobbying is not only done by the groups that want to maintain the use of fossil fuels – often called the ‘oil lobby’. There are lobbyists on all sides but as InfluenceMap (2017) found, the majority of the most influential companies are lobbying against climate change policies.

Example of a lobby group: The United States Chamber of Commerce

The United States Chamber of Commerce is an industry body which lobbies the US government about its interests. In general, the Chamber aims to reduce governmental interference with business. Members include Target, Johnson & Johnson, Home Depot, and Facebook (Cirilli, 2017).

The Chamber states the following about climate change:

“The Chamber strongly supports continued environmental improvements, including sensible approaches to reducing greenhouse gas emissions…We believe that economic growth and environmental progress are not mutually exclusive goals…To make further progress, we should be guided by what has already worked: gains in efficiency, new technologies, and the increased use of natural gas and renewable fuels.” (US Chamber of Commerce, n.d.)

It is therefore the position of the Chamber that climate change is happening, and it is implicit that it is caused at least partly by human activities because the Chamber states: “The Chamber supports efforts to reduce greenhouse gas emissions and believes technology and innovation offer the greatest potential to reduce emissions and mitigate the negative impacts of climate change” (US Chamber of Commerce, 2017), and its Chief Executive Officer stated in 2017: “To be clear, the U.S. Chamber of Commerce believes that the climate is changing, and that man is contributing to these changes” (Harbert, 2017).

The Chamber’s activities are therefore not to deny climate change. Rather, the Chamber seeks to persuade politicians that government regulation of business is not the right answer to the problem. Instead, it advocates for business to be allowed the freedom to address the issue. It is quite hard to find information about the Chamber’s specific activities beyond a series of issue briefs on its website.

In general, most lobbyists work by using some or all of the following methods:

The US Chamber of Commerce spent $103,950,000 in 2016 on lobbying (Centre for Responsive Politics, 2017) making it the biggest lobbyist in Washington D.C. It claims that it was a major advocate for the decisions by President Trump in 2017 that changed the US government’s policy on energy, describing the following among its accomplishments (US Chamber of Commerce, 2017b):

Statista, 2018. Retail sales in predominantly food stores in Great Britain from 2005 to 2016, based on volume (in million GBP). https://www.statista.com/statistics/388614/retail-sales-predominantly-food-stores-great-britain-uk/ Accessed 2 April 2018.

This page is about corporate organisations and their response to climate change, ending with a specific focus on the pro-business lobby.